The Last To Say Lyrics

The Last To Say Lyrics


As far back as he cares to remember,
He used to see his old man lose the temper
And mama's pretty face would catch it all,
On a regular basis the nest would fall.

But he was always safe from dad's rage,
Cause mama sacrificed in his place
Two-dozen years of the blood, sweat, tears,
Avoid the mirror, losing her hair from the fear

She gets to mourn for the touch of a punch,
Won't ever admit that she aint clutchin it much,
Someday she'll die, it still won't be done
The anger lives on through their son.

Cause he saw, he caught it all
A childhood of watching ma and pa get raw
It's too bad for him, nah, that's half the truth
'Cause you back with him now and he's smackin you
What happened to you? You don't have a clue.
Did your mama used to suffer accidents too?
I never knew that you would stand for abuse,
I guess I just assumed that you would pack up and move. Think about when you left him last time,
Said out loud that you would never forgive past crimes,
Sunglasses, so dark, scarf around the neck to cover the choke marks.
And since you gotta justify returnin,
You convinced yourself that he's just a hurt person.
You wanna blame that cross he bears,
But his pop's not there when he tosses you down stairs.

Please put your shoes on and step into that warm weather,
Go get yourself a more better forever.
Gotta put it down, you gotta leave it,
And don't ever come back again, you gotta mean it.
Just tear it all apart and build new,
Cause if you don't kill him, he's gonna kill you.
You can't hold hands when they make fists,
And I aint the first to say this. 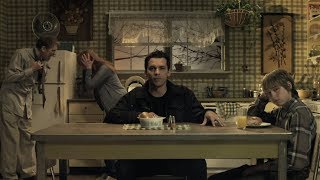