Not Another Day Lyrics

Not Another Day
Atmosphere
Good Daddy Lovelife Pure Evil Suicidegirls Fuck You Lucy The Last To Say The Keys To Life Vs. 15 Minutes Of Fame Shoes Blamegame A Song About A Friend
Atmosphere wiki Not Another Day video Atmosphere twitter Atmosphere facebook

Not Another Day Lyrics


She caught the bus at 5:06
That's in the AM for all you little trust-fund kids.
And it's a 45 minute trip
If she aint in by 6, she'll catch another pink-slip.
And that's 3, and that means FIRED,
A coffee thermice in the purse to help her keep wired.
The day-care where she drops the baby off,
thank God it's on the same block as the bus-stop.

By 5:30, she's halfway there,
And the back's already hurtin' from the buses plastic chair.
"Live to work, to live, to work, to live."
She's gotta feed the kid and give it all she's got to give.
Plus she's tryin'a catch a little overtime,
If she stays 'til 4 she could be home by 5.
Shuts her eyes for the rest of the route,
And keeps the head-phones loud to drown everything out
But the same old song:

Seems like nobody even knew his name huh?
If he disappeared would they even see the blank spot?
The only kids who might notice are the ones who push him up and down the hallways and in the lunch rooms.
Sometimes he looks at his bruises,
He wants to come to school with a gun like those kids on the news did.
Nah man, they don't deserve to die,
And he's the type of kid that couldn't murder a fly.
I guess you get used to the life,
Maybe that's why he refuses to cry.
Takes it on the chin,
Takes it in stride, What dosn't break you just makes you stronger right?

So he sits by himself on the school bus,
Hoping that today he wouldn't have to put his dukes up.
But just like any other here they come to f*ck off with his comfort can't wait for summer.
It's the same old song:

Woke up at the break of dawn when the city's blood-line starts to waste along.
The generator on those public buses is enough to bust you out of any daydream your stuck in.
I guess that's the chance you takin' when you camp out infront of that transfer station.
And this town got no answers to chase man, that's why he always sleeps near the transportation.
Pan-handling, transient freedom. Transplant not from this region.
But when the wind starts to whisper its lips he knows enough to pack it up and dip out before the winter hits. 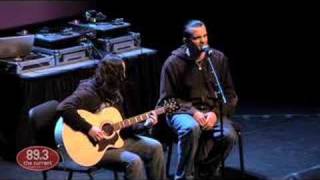