Uh-huh, ay
Doll
Why'd I go crazy on this shit?
(Run that up, Rico)
Stupid ass
Talkin like a gangster, you a dead man
Yeah I'm on it

Ay
You niggas ain't my niggas
So when you see me, ay, don't talk to me
I was with some bitches in Toronto on a private beach
You speaking on my pockets when I'm up
This p*ssy talk for me
I ain't going back and forth with bitches who don't wanna meet
He gon whoop that cash out, bitch I got my hand out
I don't give a f*ck about no hoe because I stand out
He gon bring them bands out
Ima bring my friends out
We just want the money
Tryna love me? Nigga, sit down
Bad bitch, when he get a pocket, spend that
Nigga telling me he love me, wanna take me out to dinner
I don't want him, I don't need him
Best believe that, I mistreat him
In his pocket, like a wallet, make your nigga take me shopping
Dick ain't loyal if he f*cking bitches by the boatload He gon' wanna blame it on his homie, that a bro code
Since that nigga stank me, I been on that straight beast mode
They scream "Asian doll!" while I'm shopping out in Soho
Grown bitch, [?], you can't trust a bitch who loose
[?]
Money longer than a pool stick
Niggas fake, niggas flop
[?] f*cked the opp
G'd up like some Gucci socks
You wanna see this Cochise pop
Dead man
If you rich and if you clutching, you a dead man
If you talking like you gangster, you a dead man
Tryna run up like you crazy, then you dead man
Dead man
Walk it how I talk it
Pocket swole up with your dead friends
Walking on me, niggas cold hearted
Bitches feeling
Roll a ounce, smoke a ounce, waiting on the mail man
Bitch you talking like you with it, you a dead man
Talking all that f*cking shit
Bitches ain't on shit
Niggas ain't on shit
Ain't gon' never gon be on shit
f*ck
Explain lyrics
Correct lyrics 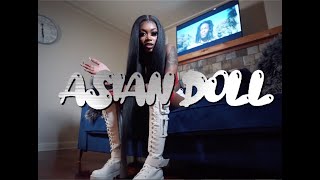 check amazon for Dead Man Freestyle mp3 download
these lyrics are submitted by HNHH1
browse other artists under A:A2A3A4A5A6A7A8A9A10A11A12A13A14