Corinthians
[parody of In the End, by Linkin Park]

It starts with love
Young thing -- I don't know why
You didn't read the letter our Lord supplied
With that in mind, I revised this rhyme to explain to you guys
All... I... know
Love is... a powerful thing
Watch the fly guys with the Benjamins sing
Watch the countdown that the MTV plays
I got ticked by the way
It's so unreal -- Britney and Jennifer Lo
Watch the wardrobe -- looks like a window
Tryin' to hold on to itty bitty clothes
You pasted them on -- this is not true love
I guess everything's a hybrid breeding love and pride
In small jealous hearts
What it gets to be is essentially just a parody
Like this rhyme is of Linkin Park

You tried so hard, but love's so far
Corinthians -- it doesn't even matter
If love's too small -- you lose it all
Corinthians -- first letter, thirteenth chapter

Love waits -- it's also kind
It doesn't envy, brag, or grow hard with pride Keeps things polite, doesn't like to fight
It denies itself, while it tries no harm
If I have the faith and philosophy
Acting like I was smarter than Socrates
And every language and tongue and prophecy
I could die and not go far
If at the stake they burned me or
I could've given every dime to many poor
If love's lackin' throw me back then
Buddy, Paul wrote that to Corinthians....
It bears everything, besides, believes and hopes, abides
That Paul fella's smart
Love he said to me will essentially keep no memory
Of you crimes 'cause it finds no fault

You tried so hard -- but love's so far
Corinthians -- it doesn't even matter
If love's too small -- you lose it all
Corinthians -- First letter, Thirteenth chapter

It likes what's just and true
Dislikes what's unrighteous though
Failure is the only one thing it can't know
The things that last are few
Things like faith and love and hope
From all these, there's only one thing you need most
Explain lyrics
Correct lyrics 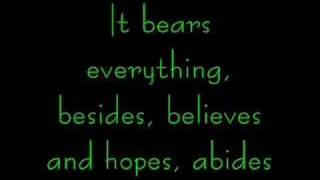