[Celph Titled:]
You better know now or know how
We so foul and profound
Blowouts, CD's sold out, the illest no doubt
When "Celph Titled" roll out, immaculate respect
"Uzi's" and "Tek's" protect your neck with a teflon turtleneck
Bitch there ain't a diesel cat that could face me
You don't really want to run your mouth and make me
Summon the gods with my mystery chant
And perform the running-man for my victory dance
Murder motherf**kers mostly over money with guns to they tummies
Hollow-tips that leave you stiffer than a mannequin dummy
Record a demo while the "Demigodz" make new songs
Your better off running the triathalon with parachutes on
A real bug-nigga, and that's how I'm better known
You make beats, I'd rather rhyme to a metronome
Other crews got ego's but can't floss right
I'll run them over have em' smoking the exhaust pipe

[Rise:]
Already proved that all my rhymes are wicked enough
They sleep when you on the mic your f**king "Jigglypuff"
A big kid jail-f**k, I don't want to grow up
And I don't care what he says yo he can suck a know what
I'm bigger than that, smile when you kicking my raps
Have converstions with your girl while she sits on my lap
Yo stop talking about they girls man it's starting to get old
Well, um, no tell they girls to stop leaving they clothes
The reason I flow, is not to just get us indoors
Pops in barber shops like my son is better than yours
Cause and effect, "Rise" is the effect and the cause
All those who came before I just perfected they flaws
Perfect with clause I have to be look at my town
Neglecting the laws of gravity, I'm not coming down
There's cops on the ground, that look like dots on a map
From the level of where I'm at when I'm dropping, you whack

[Esoteric:]
I rock rhymes that blow ends, drop lines like gold friends
Pull dimes that start trends, while your trying to make amends
Your girls be like you want it, all fives and no tens
Actually the wrong one, you bust with small guns
I look like an MC who murders the spot
Like "Derek Jeter" looks like a smaller version of "The Rock"
Bitch please, I never ever met a dick-tease
I'm so cool that when I spit free's my spit freeze
"Old Yeller", I'm known to leave a fella
With more cuts and scratches than the "Shook One's" acapella
You want to f**k around with "Esoteric"
And blown on some bullshit like working-dice-credit
When rappers try, they usually step and die
Then MC's get the message like a number I don't recognize
Your call her back, pop minds they hear me freestyle
And spend the next seven days hittin' redial

[Apathy:]
I keep the planet under my spell, under my reign
I stay on tracks, while thrwoing rappers under the train
I'm numbing your brain, stunning you while tonguing your dame
I appreciate her, everything that's under her brain
When reciting it's lighting with thunder and rain
A "Demigod" that's beyond your small blundering brains
Fortunate fame, really it's just one in the same
That I obtain while your still a bum begging for change
Trying to front like your new and really nothing has changed
You ain't underground, your locked in a dungeon with chains
Your not a thug cause' you rock your little "Lugz" and a chain
I'm a slug, nah f**k that, I'm double the pain
Your hussling game is lame, couple bucks and a name
Maybe some buckets of champagne with sluts in the range
I'll f**k with your brain and flex so your muscles are strained
Until your nothing but a punk clutching crutches and canes 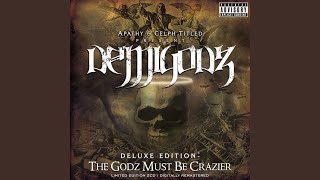 check amazon for Well Well Well mp3 download
these lyrics are submitted by kaan
browse other artists under A:A2A3A4A5A6A7A8A9A10A11A12