Army Of The Godz Lyrics

Yo I’m a bastard, the after-effect of passionate sex
I came out the bassinette blasting a TEC
Look out your window, see Ap passing your jet
With Superman in a headlock and a gat to his neck
f*ck kryptonite, picture bloods and crips on Krypton
Superhuman powers, a cape with house slippers on
I kept it real, money’s never my Achilles heel
I’m like Cliff Lee going for the Phillies deal

I’m a rebel with mics, I’m Daredevil with sight
I can be the peacemaker, I can set off the fight
Don’t provoke us, f*ck around and get your death notice
I’m just trying to raise awareness, I ain’t talking about Chef’s focus
I’m like a combination of George and Frank Lucas
You you’re LUCAS, you catch locusts, eat mucus
So don’t you ever step, never rep, you will never get better
So get clever and drop the motherf*cking mic forever

Step inna di dance, wit’ a splif of sensi
Running with them boys called DGZ
AOTP performing and they ain’t no joke
f*ck around and get your scrawny pencil neck broke
I’m a criminal, rain dance on you like a Seminole
Shitstorm your label flipping over tables
Professor X out of the chair, fully able
Wolverine up in the booth slicing your cables

This my kind of beat, the body will feel it, the mind is weak
So I slam bodies like Iron Sheik
This is hustle music nigga, we grind and eat
f*ck a hater, feel this razor that’s inside my sneaks
My brother Ap blap blap this is Honkey talk
The flow is tighter than how a f*cking honkey walk
This junkyard calls, call aner
Undertake you, break you, the ultimate warrior

Yeah million dollar man, Ted DiBiase shit
Ralph Macchio flow winning like Karate Kid
Miyagi when I politic, Obama with the poly grip
Mad at the world, everyI gotta body shit
Ric Flair silver-haired nigga getting old yo Army of the Pharaoh clique, the rest of y’all are so-so
Me and Crypt are like the legion of doom

Murderous arrangement using words to just play with
Guilty by association at my arraignment
Nightcrawler, knife brawler, fight harder
Pipe drawler if I’m dead I’m a mic martyr
Puerto rock, know how to spit, that’s undisputed
AOTP, we dirty, we ghetto, we zooted
We get gully, grime pays and y’all peddle y’all music
You got a new album, nobody listening to it

My appetite is Galactus like, eating satellites
A iceberg Cyclops will freeze the blast of light
When this bastard writes it mics the afterlife
F with us, I check niggas like the answers right
I ain’t the type to walk around with my pants all tight
I love white women but live a Black Panther’s life
This Demigod get the job done effortless
Got 'em waiting on the kid to drop like a pregnant bitch

I ain’t from this planet, your human rap skills are just lukewarm
I got alien intestines like the ones that kept Luke warm
Angering actors, action-packed factoring
Factions in Anchorage, Alaska waving an axe at you
(Who want it?)
My unfortunate orthodontist astonished
That I had cobra’s teeth, I bit him in his shoulder meat
All’s fair, I floss yeah the boss here
Won’t keep you in my prayers but I’ll keep you in my crosshairs

Vinnie San-hammer, Paz hit you with the blam blammer
Get my money on the street like a panhandler
American me motherf*cking Santana
Rock more polo shit than a Cam stanza
Y’all are Kanye, sweeter than a canned Fanta
Allahu Akbar Lord I’m Iran’s chancellor
There’s blood dripping from my mouth like a tanned panther
I’m the motherf*cking boss like the man Danza 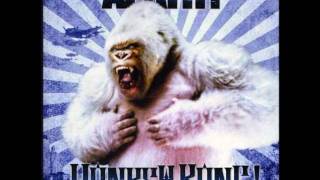 check amazon for Army Of The Godz mp3 download
these lyrics are submitted by musixmatch2
browse other artists under A:A2A3A4A5A6A7A8A9A10A11A12A13A14
Record Label(s): 2011 Dirty Version LLC
Official lyrics by