Trip On It Lyrics

Trip On It Lyrics

[Verse 1: allblack]
Ask Bape, I got every cleat up in the store (Cleat check)
Allblack got some real pimpin' goin' on
Hit Barneys, spend a D, press Scott on Louis (Thank you)
Thought I was 1017 in all this Gucci (Gucci)
Jewish money like I'm Berkley, bustdown jew'y
I'm the cleat man and money man, bitch, salute me
Field, Marshall, or the blade, all I served is coochie
Austin Powers groovy, molly in me, it's a movie
I ain't lovin', cuffin' nothin', that's for everybody
I'm like Tre Factor, my knockoff pockets is sloppy (I need it all)
Put your hands on your knees, bitch, give me a boost (Break your back)
I need a bitch who don't mind rubbers on her tooth
Bust an outcall with a white colored jawn at Ruths
Glock in the coupe, I'm in the field turned up like Juice
Everybody in your clique gon' die, you touch me (Die)
Golden State, I'm number one like Meech or Muggsy

[Verse 2: Offset Jim]
(Cal-A made that beat, I had to trip on it)
Tell ****, hit my line when that bag land
He called me, say he gotta do the bag dance
It do somethin' to my soul when that bag land
Call me Jimmy, I'm the 22nd bag man
And I put your ass to sleep, I'm the Sandman
I can't see me spending money on no lap dance
Shout out my cousin, feel like, man, I made 'em tap dance
Black nigga breakin' snow, save the last dance
Break jaws, lost some pockets on a clumsy nigga
Give me eighty for a line, hundred to lummy niggas
Runnin' plays in my cleats like Polo tee
Only want her if she focusing on her feet
Niggas vegan to the streets, never had beef
Only niggas that got stripes can stand by me
Tinted windows or I'm riding in a see-through
You ain't gotta keep staring, you can speak, boo

[Verse 3: Daboii]
Cal-A, keep it lit
And I just want the finer things in life, I feel like Polo G
You niggas worry about breakin' down the door and I done stole the key
Got a bitch to cool me down up in the booth 'cause I might overheat
I can't believe it took me all these views for you to notice me
I can't believe the motherf*ckin' devil got a hold of me
The beef he running from, your favorite rapper, I control the beef
Crazy how they hate up in my city but it's love overseas
Oh, why he never take his glasses off? They like, "That boy a geek"
Got the word that Cal-A made this bitch, so now I'm trippin' on it Heard all your music through your label and they sittin' on it
Why the f*ck is niggas muggin' like bring my gun?
Bitch, I ain't ll Cool J, I don't need no love
And brodie pull up from the three, that boy stay out the vision
I heard you was the man around this bitch, I'ma still try to, nigga
Brag about how you would never lack, well bitch, you dyin' with it
And everybody strapped, but not too many out slidin' with 'em, bitch

[Verse 4: $tupid Young]
$tupid Young, ayy
Nigga sleepin' on me, bet this 40 wake him up
Thirty rounds in the clip for niggas who thinkin' they tough
I can see y'all throwin' shade, these Cartier buffs
You flexin' bands on the 'Gram, but that ain't enough
f*ckin' with his bm, every day she call me bae
f*ck her from the am to the pm in this Bape
Young Asian nigga grinding 'til I'm in the Wraith
And Afficials be the label, meaning I can't f*ck with fakes
Tell a bitch nigga hold up like my name was Slim 4
This a real nigga party, you can't get the info
Trap with my killers and them niggas got them pistols
All type of magazines, you can get the issue

[Verse 5: Fenix Flexin]
Cal-A, keep it lit, ayy, ayy
You ain't gotta keep staring, you can speak, bitch
We them niggas ridin' 'round town tryna sweep shit
Lollipop ass nigga on some sweet shit
I got this big chop, I ain't playin' any defense
Niggas ain't gangster, they just rap good (Bitch)
Smokin' Runtz by the eighth in a Backwood
I just talked down some chile, yeah, I'm that good (Ayy)
These niggas do it for the 'Gram, they just act hood
Ayy, I been feeling like the chosen one
Bitch, your nigga broke, girl, you chose a bum
Put my buffs on a bitch, then I beat it up
It's like everywhere I go, a nigga need a cut
If you don't greet me with some money, I'ma leave it up
To you, baby
If we beefin', ain't no tweetin', I'ma heat it up
Nigga, you know I move crazy
Cal-A made that beat, I had to trip on it (Ayy, ayy)
I'm with 22nd Ways, we the Play Runners
I just pull out thirty thousand, that's some play money
Ayy, nigga sprintin', run it up
If I tell you come up out it, better give it up
Niggas got one life, I'm finna live it up
Mixing Henny with Patrón, now I'm lit as f*ck
Nigga, haha, bitch 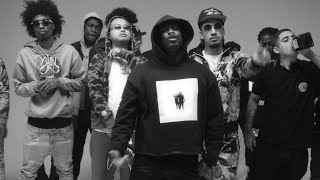