My name is Alaska Thunderf*ck and I have something to say
I like black tea, I like black d, I never touched tina and that's the T.
I know on What's the T I said that I don't drink, so you bitches probably don't know what to think when you see me at the club getting crunk, acting stupid, getting drunk, I got a hundred problems, drinking ain't one, tried to quit drinking but it's too much fun.

I keep it cute and I act my age and you're never ever gonna see me drunk on stage.
It's a new dawn it's a new age, Metallica, turn the page.
Turn the page, turn the page, Chun Li, Streets of Rage, I smashed some pumpkins, (rat?) in a cage, let's pay women an equal wage.
No, seriously.
What the f*ck.
Now let's talk, about my ex's.
I cheated on Sharon with a guy in Texas.
I'm just kidding he was really in Florida, but what the f*ck f*cking rhymes with Florida?
We were good together but we're better apart and I learned a lot from that broken heart.
Sharon and Chad, I'm happy for you.
Cerrone the cat I f*cking miss you boo.
Not every breakup turned out so well, I put a lot of really nice guys through some f*cked up hell.
But then there was this one guy.
Girl, and if you have Reddit you probably know all about this already.
This psycho ex got heavy handed tried to death star my whole f*cking planet.
Talking shit, dropping names, screen-capping, playing games.
I've had it, officially, the bitch tried to really really come for me.
He crossed me like the river styx but the sex was good cause I like small dicks. I'm not mad, I'm not pressed.
The moneys on the dresser so get dressed.
To the drunk ass messes in the meet and greet, (tried?) to treat a real girl like a piece of meat, you're pullin my hair bitch, you spilled on my dress bitch, you think you're a fan but you're only a mess bitch.
Real fans, I f*cking love you, I'd lay myself down on the traintracks for you, in fact, I made this f*cking record for you, call me Delano because I Adore you.
Yeah, you specifically.
The AAA girls went bankrupt morally, Willam met some models and serviced them orally.
He's probably on the way to the replace us quick, just like he f*cking did to Detox and Vic.
Michelle always told me not to f*ck with cliques, Michelle always told me not to f*ck with cliques.
Oh yeah that reminds me about that thing, that secret I've been hiding like a dingaling.
I did some challenges, I won a few, oh yeah that's a thing called All Stars 2.
I can't blame you Adore, they went in really harsh that first day.
And if it had been me in your position, who knows.
I might have done the same thing.
I'm just lucky I guess, I feel blessed but I'm stressed, I wanna be the best I just wanna be the best. $100, 000 it ain't that much to f*ck up your mind and all your friends that you trust.
I'm sorry Coco, I'm sorry Tatianna, I'm sorry Mom but I smoked some marijuana.
Move on, cause it's all just a game.
And it is what it is at the end of the day. 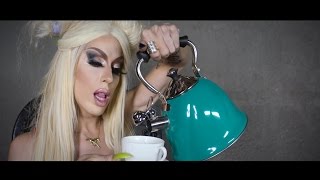 check amazon for The T mp3 download
these lyrics are submitted by BURKUL8
browse other artists under A:A2A3A4A5A6A7A8A9A10A11A12A13A14
Record Label(s): 2016 Producer Entertainment Group
Official lyrics by