[Intro: Akrobatik - talking]
(Gimme some)
Uh, move your body like
Throw your hands up
Move your arms around
Yep (I got soul)
Nod your head like (This nigga got soul)
Yo, yo

[Verse 1: Akrobatik]
This is just another take on the age old question (uh)
Where's the rappers that's prepared to rip a stage show fresh and
Get the jam started based on talent and not gimmicks? (word)
It's like that across the board though, we all critics
You could be white and good, but don't prep the role
Cause it don't mean shit if it ain't got soul (soul, soul, soul, soul)
You could be a hard brother from the grittiest streets
But you ain't got soul if you can't ride beats
So, so, where the soul go?
If you got holes through your whole flow, you need to know your role bro
But see I rip it like an old pro
And leave my mark like rap is a wall and I'm soul glo
I'm just a kid you heard about through word of mouth
Who grew up in the gutter but avoided the murder route
While other cats were pulling the burners out
I was on the field, playin fullback, runnin a mean corner route (true)
The line of scrimmage kept me focused on a finer image
Smoke a oolie? Nope, I got a f*ckin rhyme to finish
I got my whole life to smoke weed
But for now I know what the people need

[Verse 2: Akrobatik]
Move your body with it, party with it
Them who lack soul, you know they probably hardly get it
Grab a little hottie, hit it, crack it while I oddly spit it
Pack in lots of spots, so when I hit you know you won't forget it (uh)
Many know I'm nice, the insecure won't admit it
Since I don't put a gangsta lifestyle on exhibit (uh)
But that ain't me, I refuse it, to do this
Shit for y'all is a privilege, I can't abuse it (word up)
And after all this is music doofus (uh)
And all I have to proof is my nice with the usage
Right about now get loose b-boys (uh)
While my soul glo like Bruce Leeroy (Who's the mack?)
Sho nuff, the flow is so rough
Kick back, watch a fly ass show and go puff (puff)
Me? I got the whole night to smoke weed
But for now I know what the people need 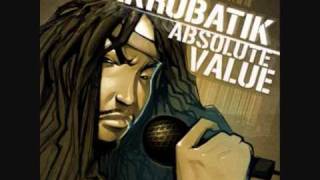