She Painted Fire Across The Skyline Lyrics

Total views: 0 times this weekAlbum: Pale Folklore / Original Release Date: 2016-07-15Genre: MetalSong Duration: 8 min 35 sec
Agalloch - She Painted Fire Across The Skyline
In The Shadow Of Our Pale Companion This White Mountain On Which You Will Die A Poem By Yeats You Were But A Ghost In My Arms The Melancholy Spirit The Great Cold Death Of The Earth I Am The Wooden Doors Hallways Of Enchanted Ebony Dead Winter Days As Embers Dress The Sky
Official page Agalloch wiki She Painted Fire Across The Skyline video Agalloch twitter Agalloch facebook

She Painted Fire Across The Skyline Lyrics


Oh dismal mourning...
I open my weary eyes once again
My life has been left hollow and ashes have filled the gorge of my within
Last night I hoped and wished I'd die in my sleep but no catharsis was granted to
me
Will this pain ever pass?
The enchanting perfume of winter and the bleak, cold breath of her still haunts
me...
Oportet ubique pulchritudinem evanescere

So half of me rode to the mountains and the other half soared high in the winds
to a place where the angels had fallen, the soil gagged and choked on their wings
My soul was the pale skyline that she stretched across the horizon
Two years had brought the fire that she paints upon my loathsome canvas

She is the dark one...
As a bird I watched her from my cold tower in the heavens
and when she fell from the northplace, I flew down and embraced her
I took her where the snow falls forever, she showed me the haunted woods
We gathered together in the oaken palace, free from both death and life
The fire blazed in her eyes one day and she tore the soul from my chest
With a bleeding heart, I flew back to my cold tower
to never escape and lie in a pool of death forever

I saw the nightfall...
It called to me like a river of shadows
It sang to me with the cries of a thousand ravens that blackened the sky as they
took flight
and sank the Sol
I shall never trust the sun again, Eridanis Nadir

So alas the sun had descended, her fire burned brilliant in the sky
The trees bore their withered silhouettes, that cast a spell upon unearthly white
No wolf shall keep his secrets, no bird shall dance the skyline
And I am left with nothing but an oath that gleams like a sword
To bathe in the blood of man
Mankind... 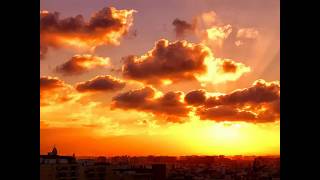 check amazon for She Painted Fire Across The Skyline mp3 download
browse other artists under A:A2A3A4A5A6A7A8A9A10A11A12
Record Label(s): 2016 The End Records
Official lyrics by