O-way or no way, you know the ting already (You know)
f*ck the other side (Gang)

I bust my gun, don't think 'bout karma
Think 'bout that after I lean wit' it (Lean wit' it)
Tryna hit that target
Anyone I see I recognise, I'ma blast his rarted
He thought he was the only one that had it when he blasted
'Til the mandem barked it
Simple, half the mandem are likkle boys, not even half are man (Not even half are man)
We don't wanna talk, manaman are just talkin' (Talkin')
We're not into this talkin' ting, grab machine on this walkin' ting
Treat waps like gyal in this clartin' ting
Who put the "Oosh" in "Whoosh" and the "M" in "Muhh"
And the "W" in "Wee-wee-wee, wee"
What you wan' call it? (What you wan' call it?)
It don't matter, any corn that we slap 'round there
Know boy definitely be fallin'
Slap two in him, make him think God definitely be callin'
[?] warring ting
They don't want energy, tryna corn that prick (Never them)
Corn for a frenemy, I don't trust that shit
Got 'nuff enemies and we scare them pricks
There's no enemy if I stay with stick (Gang)
If I, If I stay with the stick (Grr)
If I stay with it and lean with it
Dunkirk, Broadwater, N17, man be with it
The ding-dong got lifted after bap, bap, bap, bap
Hope I never got seen in it

You get me? (You know)
Real life in this ting, fam, trust me (Grr)
Knee deep (Bap), you know
Free the whole of the O man
O to the death of me, you know
O-way you know it (Grr), gang

When man creep up, mind your head back, ease up
We send corn like delivering pizza
I don't wanna hear, "Philly don't dance"
Cah I made philly dance when I slapped that nina
Made man trip up and push their friend
Tryna bust that corn now, why you so eager? (Gang)
I got my broski's back when I grab this mash cah I'm his keeper
We take trips when we feel like (Gang)
They don't touch none of my G's (None)
We slap, bang when we feel like it
Strap up and go ride when we feel like it (Sure)
"What you feelin' like?", don't ask me why we feel like this
Them man, they talk tough
When we hear it about, we go 'round enough and air out pricks (On gang)
I swear my man was cool, how's he entertaining this now?
He's another nigga we ain't playin' with
[?] catch him, he better stay where he is (Baow)
He ain't even gotta say what it is
Wherever he is, he better pray where he is
Better have a pillow and a duvet where he is
Anywhere we see him, he gotta lay where he is
Man's dangerous, slap man, spontaneous (Anywhere)
This badness ain't contagious Been 'round bare pricks and they're still the same to us (You know)
It weren't never 'bout the fame for us (Nah)
Them man have always had a name to rarse
Make money, live life is the aim for us
Don't stop 'til the G's all papered up (Philly G)
I just take it, load it and send it there
I don't show gyal, that's where they're on (I don't)
And I always got a change of clothes in my car
Just open my boot, put my gear on
More time, I've got offensive weapons on me
So the Metropolitan's what I'm scared of (f*cking jakes)
I just rise it, dump it, skrrr off
Who wants to drop next? (Who?)
Hand on my heart, they're wet (Hand on my heart)
I swear it gets me vexed the way they chat on the net like none of them's dead (Haha)
None of my bros-dem take check (None of them)
As for opps, they ride and get drenched (Gang)
Last ride out really went left
Made 'em crash their cars on the back hill, stress (Pussies)
Lucky none of them dead that day (Ah)
Whoever we caught woulda dead that day (Ah)
Have you ever watched Rambo?
I heard ... got cheffed that way (Whoosh)
And I don't wanna hear no chat about yout's sippin' lean on the strip, we done shut that place
Just to show that we hate that place, wait
How many times did we take that place?
Long live Josh, bro swung his knife, you can go ask ... (Long live Josh)
Free all the lifers (Free all the lifers)
Got the niners
Best do the dash like ...
Get bun like ... and get write off (Gang)
I see man screaming out, "Out 'til late"
But his hand didn't work, just sign off (p*ssy), gang
How many times did the strip get clean up? (Grr)
With a broom, got sweet up
I'm on the opp block district with a big ting tryna bun a next eediat (Gang)
We're delivering corn, you could never [?], tryna run when they see us (Run)
Don't slip, bro, you best keep up
My head's hot, tryna leave a man steam up
Swing that, dig it and turn it (Whoosh)
Go spin that dinger, reverse it
Who's that? Slap that, burst him
'Nuff man woulda got corn up that day if the wap did never stop workin' (Minor)
Minor, we're still purgin' (Ha)
Tryna bill a next up and curl him (AB)

You know (Grr, bap, bap, bap)
Oh, yeah
You know the ting already
(I love Chris Rich)
Ayy, spin this coupe
I just seen suttin'
Shoulda never been in vids
If I'd have seen you, it wouldn't be nothin' (It wouldn't be nothin')
Grr, I want squeeze suttin'
Bad man don't squeeze for nothin'
Bad man don't bang this rasheen for fun
[?]
You ain't never bust corn, you're a liar
None of them pussies are riders
[?]
Explain lyrics
Correct lyrics 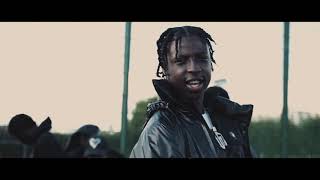