Lonely's To The Bone Lyrics

Lonely's To The Bone Lyrics

I took her keys, she took a cab
She made sure the front door slammed
Between the rain and the whiskey the whole thing was still a blur

Door’s unlocked, coffee’s on
The fire’s burnin’ but she still ain’t home
Don’t know if I’ll ever learn to live with that
And I found out that

Oh, it would be so easy if
Her memory’d just move on
And leaving’s only skin deep
But lonely’s to the bone

Lonely’s to the bone x3 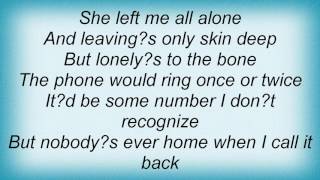