When I get to swerving on 'em, spinning the curb up on 'em
Sending Suburbans on 'em and we lurking on 'em
Ain't no funeral service for 'em (Boom, boom, boom)
I'm on a mission for 'em, Sniper Gang got the vision on 'em
Never snitching, go to prison for 'em (Nah)
Hundred round drum, thirty clip is on 'em, blood dripping on 'em
p*ssy nigga went against the gang, you know that's a violation
Penalty is death, take his last breath
Bullets burning, like I'm frying bacon, niggas dying waiting
Never mind the hating, I'm a General, nigga (Blicky the Blicky)
I'm about to put an end to you niggas
Niggas f*cked your baby momma, spent up all your money
All you did was tell on them niggas? (Bands, bands, bands, bands)
You was with this gang banging, you was tryna be like 22
I'm responsible for all you niggas (Blicky the Blicky)
I'm the realest nigga, tell the truth (Bop, bop, bop)
And I know I might alarm you, nobody thinks you a Don Q
Thirty round knocking off a limb, maybe leg, head, plus an arm too
I could look into your eyes, know you never been on a mission
Some niggas be bitch and never really listen
Get put in a ditch and now his momma missing
Might put out that hit and now we gotta get him
We caught us a lick and now we gotta wet 'em
This shit ain't no diss, ain't no Tory Lanez
I pull out that blick and leave no remains
You don't want these Blicky niggas parked inside of Highbridge
Look what I did, got the ladder hanging out the stick
Looking like a high bridge, you could die, kid
f*ck Real Ryte, y'all can suck a dick and get killed too
Y'all know damn well who got y'all mans hit Even Kooda blood would get spilled too
Killing niggas then I rap about it, like I'm Melly, nigga (Right)
Ain't no shit that you could tell me, nigga (Right)
Murder on my mind, is you ready, nigga, I'm a deadly nigga
Can't compare my shit to none of these bitch niggas
Not JD, not D Sav, and especially not that snitch nigga

Suck my dick
Bitch we roll in threes, two Blicky's shooting and one driver, that's how it's suppose to be
p*ssy, you ain't never kill a body, can't get close to me
We gon' keep on flipping, spinning blocks until they all deceased
Invest in a ratchet or a casket (Blicky, the Blicky, the Blicky)
They never be where they suppose to be
I got the heat to control streets (Control the streets)
I bet this dick will control your treesh (Yeesh, yeesh)
Couple head shots, gon' expose his dreams
You caught a opp and then flew to Miami (Yeah right)
That nigga lied
All of my opps took a trip to Miami (Pussies)
I wonder why
I'm with them Snipers and Blicky's don't panic (Sniper, Blicky)
Either way niggas die
I just came home, I beat it, don't care to go back
That young nigga wilding (Gang, Gang, Gang)
If the nigga Real-Right, tell the driver bend right
G Herbo get herb too
Post on my pic then delete it, I'll murk you
But shout out to Chiraq, I know where the guys at
Spinning with Rugers, so you better duck
Or they aim where your mind at
Grrrrtttttt, boom! 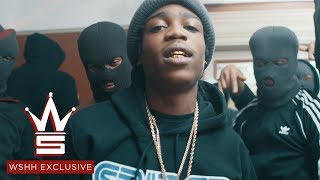 check amazon for Sniper Gang Freestyle mp3 download
these lyrics are submitted by itunes1
browse other artists under 0-9:#2
Record Label(s): 2019 Atlantic Recording Corporation for the United States and WEA International Inc for the world outside of the United States
Official lyrics by