Is Happiness Just A Word? Lyrics

Darkness comes beneath the dying stars
With all the blood and scars
I'm gonna hunt you
With fear I appear
Nothing will stop me
The greater
Creature in me
Shattered, I will capture you
So run

My family don't understand what I go through
Under diagnosed for 20 years, ain't never broke through
You ever been in such a fog you don't know you?
Never being able to do the shit you're supposed to?
I wouldn't wish it on anyone that I'm close to
Wouldn't wish it on anybody that I'm opposed to
There's not an accurate diagnosis to show you
Basic neurobiology isn't close to it
I'm watching life as a spectator
I can't help myself, even though I possessed data
It's not a part of my spirit to want to test nature
You think you know what I'm feeling, cousin, then let's wager
I'm having trouble retaining new information
Familiar scenes starting to look foreign- derealization
Everybody tired of being patient
Mama wondering why her baby crying in the basement
Constant rumination just exacerbates it
To the point where I can't barely narrate it
I've had doctors tell me that my mind is fascinating
But they can't tell me why the sickness has been activated

My head don't work, the meds don't work But I don't want to be dead, dead don't work
Sleep's the cousin of death, the bed don't work
Maybe I'd rather be dead; dead don't hurt
Realization of an inherent emptiness
Maybe that's another sin for the pessimist
Possibly I am a jinn with a exorcist
I've fallen because I've been on the precipice
Maybe it's my mama's possible regret
Maybe it's a neurological neglect
Maybe it's the reason why water's wet
The angular gyrus and where the frontal lobe connect
But maybe I'm being too complicated for you
Maybe I should just be calm and explain it to you
The psychiatrist thinking they could fool you
Paxel, Zoloft, it's just wasteful to you
I've tried meditation, tried to sit in silence
But how the f*ck that help a neurochemical imbalance?
Why would you tell a person that they were childish
Without an understanding of the pain that they surround in?
I always feel foggy somatic detachment
It's like my body isn't connected to actions
It destroys everything that's affected the fragments
I don't have nothing but senses and sadness 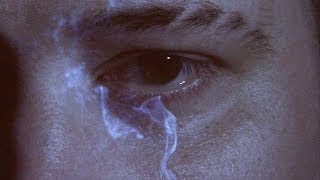