1986 - return of the horror flicks
More deadly than The Omen, a killer and a showman
Like the devil in The Excorcist
But this flick can cause a heart attack
Cause it's more than action-packed
It's alive and killin and the star is a villain
And his name is Monster Crack
The crack monster

He talks to ya like he's alive
And when he talks like bees to a hive
The people come runnin, the older and the young'in
The place he lives in is the house they hung in
He wants your money, only your money
He'll make you feel good for a real fast twenty
The bill is passed and the dollars go fast
The feeling is high but the high don't last
Long enough for you to even read a paper
But you still thirst and hunger for the vapor
Although he is an animate, he'll make you feel
That he can breathe, think, talk and bleed for real
You should stay away cause all he's about
Is just makin you broke and stringin you out
It only takes one kiss and a deep, deep breath
Then you're hooked for life cause it's the kiss of death

Like savoir-faire he's everywhere
He'll hook an innocent baby cause he don't care
He loves to eat, girls and boys, and he's nothin but poison
The biggest? of Michael Jackson he's makin noise in
The streets he's notorious, to pushers he's glorious
To girls he's a pimp cause he turns em to the whoriest
Materialistic nymphomaniacs
That'll do anything for Monster Crack
Give away her body, steal from her brother
Fight her father or sell her mother
Cause when you're possessed by Crack, God bless
Your soul, cause he'll take the rest

The power of the mind should not be wasted
But the agony of defeat is always tasted
By those who chose to willingly oppose
? instead they follow their nose
And the more you get, the more you want
You're killin your brain out, so later on it'll haunt
You you become insatiable, you can't get enough
When your money gets low, things really get rough
It's your only objective, you lose all perspective
On life, you're obsessed, possessed and defective
Losin weight and disappearin but still perseverin
Your body tells you no, but all you're hearin
Is the crack talk

In South Africa many a brother died
Tryin to fight back against apartheid
Bombs are flying, people are dying
Terrorists terrorizing and the whole world's trying
To prevent another war, but I got a surprise
There's already - one right before your eyes
And we're nowhere near, the end this is only the beginning
Until this point the Crack has been winning
Weakening hearts, corrupting minds
A stone cold killer, very easy to find
And once he's caught by the law, he can't go to jail
Cause he's nothin but a little piece of matter for sale
Usin people like pawns in the game of chess
And he is the king, more powerful than the rest 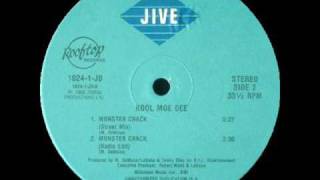