The sky was grey and leaden,
Wolves howling on the wind.
Above the land of T¡r Na n-àg
The ancient calm still reigned.

"I long to stand on my home shore",
Said Ossian in a glare.
"But Ossian love, the is your home",
Said Niamh of the golden hair.

She seen the look upon his face,
She knew the pain he felt.
He longed to be home among his race,
With his ring-sword strapped to his belt.

"Do not dismount from the steed you ride,
From this world it belongs.
If you dismount you shall fall by its side,
To be remembered only in faerie songs".

He galloped across the faerie seas,
Back to the land of man.
Watched by the Gods and the Daoine S¡dhe,
His life to end as it began.

"I have returned", he said aloud,
But no one was there to hear.
His noble home once bold and proud,
Had crumbled through the many years.

A power had come into the land,
To threaten the olden ways.
The people ignore the ancient Gods,
They bid farewell to a golden age.

Ossian stopped his gallant steed,
He could see some people ahead.
"Help us please, our brother are trapped-
Beneath this dolmen", they said.

He leaned down from his mount,
And gripped the dolmen firm.
From the earth the rocks was freed,
The people beneath unharmed.

But from the strain his saddle broke,
To the earth he was cast.
A cry of pain burst from his throat,
The years now caught him at last.

In T¡r Na n-àg Niamh shed a tear,
When she saw the rider-less horse.
Ossian was gone, her greatest fear,
Her heart was full of deep remorse. 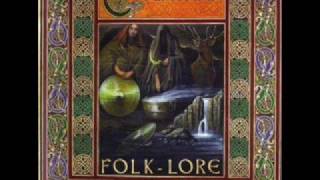