Bitch, I'm hot
Bitch, I'm Cole
Bitch too young
Bitch, I'm old
Straight out the mental asylum with a blanket and a wallet
Recovering alcoholic that keeps missing the f*cking vomit
Turn me up, turn me down
Who's the fat nasty bitch in the back ground? (who's that?)
America, me, I'm rough, I'm rugged
Blade up my ass, don't do this to me little puppy!
I'm jealous of Tyler, wanna be him so bad
I do some love songs, dressed up like a fag! (Hahaha)
Pop pikes, f*cking hot dykes
Stiff lefts, barely no rights (check this shit!)
Can't stay focused, blowing with Otis
LA fitness, Butt naked, trying to get noticed (notice me!)
DJ Envy, give me a crib
f*ck that, I'm starving, nigga give me a rib (I'm holding!)
Gold banger, stiff with the coat hanger
Joined the Wu-Tang Clan, 39th chamber
Am I a fiend, or am I clean?
Sold a championship ring to drain my green (I need it!)
When I'm talking, they listen
Where's Harvey Weinstein?
I need a audition! (f*ck me!)
I'm Ric Flair to this stair
Look at my hair! They all stop and stare
The ugly guy, the super high
I'm super fly, the cutie pie
Let me calm down

My wife said I was a hoe for apologizing to Joe (yup)
Threw my bachelor's note, told me I had to go (Ay!)
f*ck it! It's time I kill them all (f*ck IT!)
Start with Joe and then blast that mall (blauw!)
Angela Lee got me on lip service (why?)
Talk about my small dick? I'm starting to get nervous (Angela)
Breaking niggas legs, they can't walk no more (no)
Charlemagne, you just full of shit, you can't talk no more
Tell Nick Cannon, bring me on Wilin' Out
Eminem f*cking Mariah, that's all I'm gonna talk about
If I die, f*ck it, let the opps smoke me (f*ck it!)
Put me on Instagram live, let Bosco roast me (shower cap...)
BET awards, let's shoot up the party (yup)
And if I get caught, I'm telling on everybody (STOP SNITCHING!)
Put me in a cell with bread and water
Once a year let me talk to my daughter
Now I'm like Tee Grizzly, it's the first day out
Shoot at the front door, because there's one way out (buh buh buh buh!)
Grimy niggas, slimy nigga, hot and ready
Left over spaghetti and a whole bunch of reggie!
Big bank, big tank, big frank
We ain't taking off our shoes
Our f*cking feet stank!
Let's talk about these sexy girls in the industry
And how they all want to get with me
I want to make love to Megan Thee Stallion
Made a fake page, to her I was Italian
Gangsta Boo, Foxy Brown ain't playing
Let me stop, she can't hear what I'm saying (Foxy!)
City girls, I want y'all to hold me
Matter of fact, f*ck it, swipe me a rolly
Yo chill man, you buggin
Explain lyrics
Correct lyrics 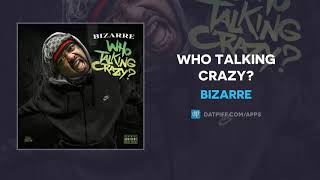 check amazon for Who Talking Crazy? mp3 download
these lyrics are submitted by itunes3
browse other artists under B:B2B3B4B5B6B7B8B9B10B11
Record Label(s): 2020 No Money Records
Official lyrics by