* Way back in the day before the age of gold chains and fat fades
When Zulu Nation was still called the Black Spades
A fetus was formed. A genius was born
Adidas was worn. And pieces of your speakers was torn
I used to fiend for mics like and addict for rocks
The baddest on blocks who'd rock till the static would stop
Herbs beating me with words was absurd
Like traffic cops who cocked semi-automatic Glocks to pop
Stetsosonic was hot. Kwame was not
I wore out the shell tops that copped when Planet Rock dropped
From Ultramag MC's to JB to BDP and KMD I learned to MC
Crumple it up, scratch it out, think it over
Spit it over and over the instrumental to The Bridge Is Over
I was funky, fresh dressed to impress
Got it made with the words that I manifest
You'll never dismantle the best. Give your mandibles a rest
I eat mics I bless like a cannibal with flesh
Still number one like It's KRS
With my whole name written across my chest
And it goes, A for accurate. P for poetry
A for the automatic respect you're showin me
T for the tight lyrics and H cuz shit is hot
And last but not least Y....why not

(hook x4)
With the kicks, snares, kicks and hi hats
Still in the trade of that ol' boom bap

Let's meet up in the Bronx with Cyrus for a meeting
Before he started speaking, they blasted him leaving him bleeding
And everybody running, searching for escape
Twenty years later I'm making moves trying to push a demo tape
And it's relative. This hip hop scene is too negative
Amped up and wild, take a sedative
Back in the past when Grandmaster Flash started to scratch,
They perfected the art of the raps
Taking a part of the wax, make it the heart of the track
Now it's a part of the past. All of it's wack. f**k lacing a DAT
I'd rather lace my Adidas. The beat is taking it back
To the breaking and graf. Punchlines that made us laugh
Dookie gold chains and four finger rings to match
Mercedes Benz on medallions and Kangol hats
Even Big Daddy Kane had the hoes to sex
Pete Rock and CL Smooth had the pose on the Lex
Tommy Hilfiger, Girbauds and Polo sets
B Boy stance while waiting for your foes to flex
Photos with Gucci airbrush backdrops
Cardboard box on blacktops and the birth of fat spots
Melle had to wonder why he kept from going under
But the strength of hip hop got stronger every summer 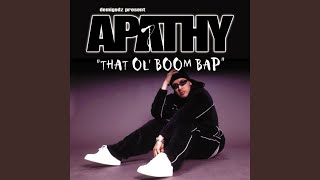